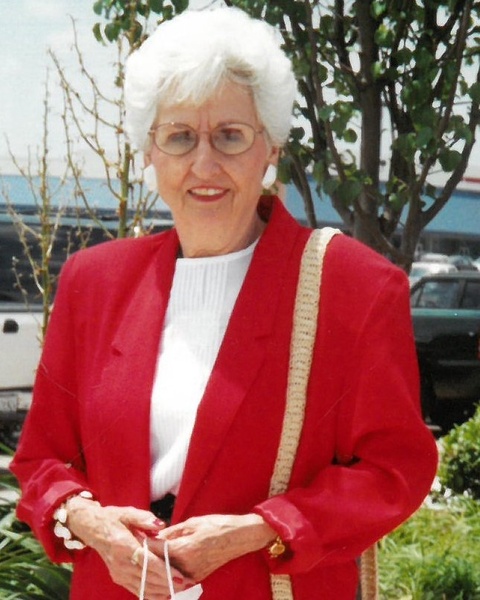 Ilene Ballard Hughes passed away peacefully on Friday, September 23, 2022 at her daughter’s home. She was born on August 24, 1921 in Kaufman, Texas to Stella and Luce D’Ls Ballard, both of who preceded her in death along with her husband George Hughes, sisters Virginia Ballard Helm, Dee Ballard Cottingham, and Sarah Elizabeth Ballard, granddaughter-in-law Cara Hobbs and granddaughter-in-law Yvonne Hughes. Ilene was born in Kaufman, raised on a farm in Ola, and graduated from Kaufman ISD. She worked on her parents’ farm raising crops and cattle and even picking cotton. She lived through the Great Depression, then met and married George Hughes at the age of 18 years old. They moved to a Dallas boarding house in 1940 as they worked numerous jobs until her husband, George, enlisted into the Army Air Force in 1943 during World War II. She then actually worked at a factory in Dallas making military gas tank bladders for fighter planes, which were similar to the the bomber planes her husband flew in during the war. After the war was over, they moved to several cities in North Texas as her husband worked for TP&L Electric Company. They finally settled in Forney in 1953 with their two children, George Dee and Paula Joyce. She raised her family and resided in this same home for 70 years until moving to assisted living and then eventually to Kaufman at her daughter’s home, right on the land where she was raised. She worked many jobs while raising her family in Forney, including working at five grocery stores and one fast food restaurant before retiring from Texas Instruments after 10 years of working the “dead man’s shift,” midnight to 7 am. She worked these jobs to supplement the family income. She was always very active in her children’s and grandchildren’s lives, and even much later in her great-grandchildren’s lives. She was very involved in community organizations and events such as the PTA, Cub Scouts and Girl Scouts, women’s auxiliary, and senior citizens groups. Additionally she was active in her church up until the COVID pandemic. She especially enjoyed watching her children and grandchildren play sports, cheering them on “very loudly” with encouragement, and babysitting her grandchildren and even great grandchildren. Ilene was very outgoing, always generously lending a helping hand to those needing more than she did. She was loved by everyone she met. She leaves behind a multitude of family members, spanning a large family tree, including her son, George Dee Hughes and his wife, Charlotte; and her daughter, Paula Joyce Hughes Hobbs, and her husband, Darrell. She leaves behind 7 grandchildren: Ginger Hughes Hudson, Wendi Hughes Vike and her husband Rodney, Scott Hughes and his wife Cortney, Heidi Hughes Wren and her husband Shaun, Justin Hobbs and his wife Kelsey, Aaron Hobbs and his wife Nicole, and Kristina Hobbs Bomer and her husband John. Additionally, she leaves 22 great-grandchildren, 8 great-great-grandchildren, numerous nieces and nephews, as well as other relatives, extended family, and beloved friends. Among these are those who carry her namesake, niece Jackie Ilene, granddaughter Heidi Ilene, and great-granddaughter Kate Ilene.

To order memorial trees or send flowers to the family in memory of Ilene Hughes, please visit our flower store.